This is your page, a place to share your memories of loved ones past and present.​ The story will be in your words, with editing help by Obit Options.​ Your story will stay on the Obit Options website as long as space is available.​ My fingers flew across the keys of the typewriter, surprising me with their unwonted dexterity. I stopped at the end of a paragraph to admire the typewriter once more. It was a reconditioned second-hand IBM Selectric. I had wished for one like it for some time. In a way it was my legacy from my Daddy. Our dad loved his children, but he had no worldly goods to leave us when he died that February when I was nearly fifty years old. We didn't want worldly goods anyway, we wanted to keep Daddy, but the cruel scourge of cancer had taken him from us in just four short months.
Though nominally a Christian for many years, he'd grown closer to God after his first bout with cancer five years earlier. He was not backward in telling anyone who came to see him that he was ready to meet the Lord either. But even knowing that, it was hard for us to let him go.
A typewriter was not the legacy you would expect from a man whose formal schooling ended with the fourth grade. And strictly speaking, he hadn't. I had bought the typewriter with money realized from the surrender of a small life insurance policy on my life on which Daddy paid premiums for twenty years.
I opened a desk drawer and pulled out the copy of the policy I'd kept. A few cents for each $100 of the face value of the $250 policy. It had long been paid up since it had been taken out by Daddy when I was only twelve years old. Interest had been accumulating, penny by penny, since the end of the twenty years premium payments. I hope somehow he knows how much he contributed through that typewriter, to my becoming a writer, the life I have loved and pursued for more than twenty-five years now.

I don't have a first memory of my grandmother, but we formed a powerful bond from the day I arrived home from the hospital a week after my birth. My grandmother lived three doors down from my parents, and she rushed to scoop me from the crib before my dad could get acquainted with me.​ I was her first grandchild.

At my uncle’s prompting I called her Mamaw.​ She would have chosen Grandma instead, but I didn’t know that till much too late.

I remember the stories she told me about growing up in the Indian Springs area of Sullivan County, Tennessee during the late nineteenth and early twentieth centuries. I should  remember; I had her repeat those stories often enough.​ Years later, I realize that there wasn’t a lot to her stories,  but Mamaw stretched them out and made the people she knew more than fifty years earlier come alive to a small child.​

I would sit on her lap as she read to me from Aunt Charlotte’s Bedtime Bible Stories, a book I’ve kept all these years.​ When I was hardly more than a baby, Mamaw had been babysitting me and my mother came to take me home.​ I greeted Mom by pointing to a picture on the wall and excitedly telling her that was Jesus.​

My Uncle Squirt, as I called him, worked in a neighborhood market and sent Mamaw her groceries everyday. She loved her Brown Mules (chocolate covered ice cream on a stick).​ Peppermint patties and peppermint sticks were favorites.​ Soft boiled eggs on toast was her usual breakfast.

The years moved along and my grandmother’s mind became clouded with confusion.​ Hardening of the arteries they called it then.​ My younger sisters came too late to make the connection that I did with our grandmother.​ It’s been fifty years since she moved to her heavenly home.​ It doesn’t seem that long ago…and yet it does. 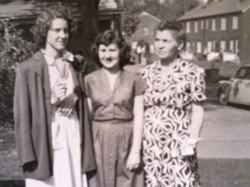 My gradmother, mother and cousin. 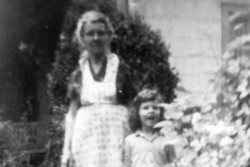 Made with SimDif
Donna Leah Alvis